Nyhavn is a 17th Century canal and entertainment district in Copenhagen, Denmark. 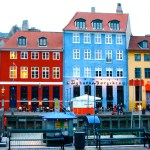 It’s also one of the most beautiful waterfront I’ve been to. The houses, colors and shape, were exactly what I pictured in my head and better. After walking around the city, it was nice to stroll down Nyhavn and admiring the architecture and the colors.

It would have been awesome if I had visited during the summer since I can only imagine everyone sitting outside, enjoying a beer, soaking up the sun and the awesome view but Nyhavn in the winter had its beauty as well. It was quiet, peaceful and watching the sunset was pretty amazing.

Apparently, Nyhavn used to be a busy commercial port called Den Nye Havn (the New Haven) where ships would dock and the area was covered with sailors, ladies and pubs. Now, the beautifully slanted old houses renovated, classy restaurants. Food there was pretty pricey so we didn’t end up getting dinner on Nyhavn but I’d love to come back someitme during the summer and enjoy a glass of beer outside! Blog: Hanging out with Travel Lovers at #TravelMassive & #Origin in Berlin!