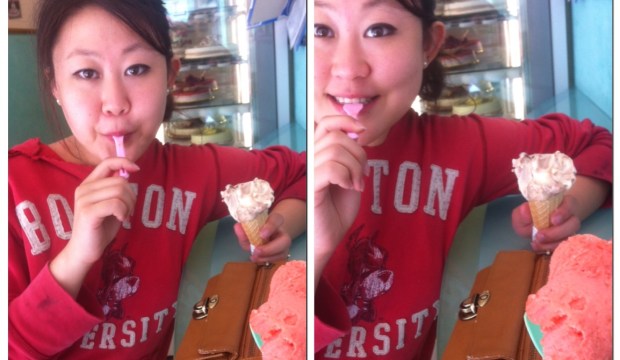 The day started out perfectly fine. We had found an awesome host in Genova, the weather was absolutely gorgeous and we were well caffeinated and ready to explore what this beautiful coast city had to offer. After a long day of exploring the city, taking the train to the sea side, eating yummy gelato and enjoying lunch by the water with amazing view, it was time to start heading back to our host’s house. Everything was perfect apart from the fact that I was a little tired from all the walking around and being in the sun all day.

Once we got to the city, we decided to call our host to see if he was home – I looked into my bag to grab some coins for the pay phone and…..

That’s pretty much all I said and the only thing that was going through in my head. When it first happens, you are kind of in disbelief and I refused to accept the fact that my wallet was gone. Then, I started thinking about everything that was in it: my two credit cards (one main one and one backup just in case I lost the main one – IDIOTs keep both in the same wallet) and my passport (uhhh….yea). I started panicking even more. Thank god I wasn’t alone because if I was, I would have been a mess. We decided to track back the way we came from and look for a police station to report it – just in case it magically appeared. The whole time, I was hating myself for being so careless. Whether it was stolen or lost, it’s my fault. I was the one that didn’t close the bag properly, I was the one not being aware of my surroundings.. I couldn’t blame anyone. That made it harder to accept than anything. If I had simply thought I was the victim and someone had stolen it, I would be angry – but I wasn’t. I was really disappointed at myself and knew that I had no one else to blame. Wahhh. :'(

Went to the station police who was as helpful as my memory (not at all). He simply said, ‘No English report, go to another station, can’t help you, good luck.’ Well, at least he wished me luck. At this time, my brain wasn’t functioning very well so we decided to head home and try again tomorrow. I got home, cancelled my cards, found the closest Korean embassy (Milan) and just tried to forget about it. Hey, at least I wasn’t hurt. Proceed reading accounts of other people who have also lost their wallet while traveling to make myself feel better.

The next day, we lugged our bags, went to the central station and looked for the police there. They were more helpful at the station and I was able to file a report using my high school drama skills to act out what had happened (or what I thought had happened). I kept my hopes up as I left the station and feeling shitty, decided to sit for a second. Then, I thought – why not try calling the places we’ve visited yesterday, might as well try. Called the restaurant we got lunch at – ‘no… no wallet here.. sorry.’ Disappointed, I decided to give the gelateria a try.. “uhh.. yesterday, I go to your store, maybe I leave my portafoglio (wallet in Italian I learned at the police station)..” I said in my simplest English to make over-the-phone communication a little easier. “Si, si.. I understand what you say. Uh… Your name, Park. Your passport and documentation here.”

And…… HUGE sigh of relief. “THANK YOU, grazie, grazie.. I go there today. Grazie!”

Yes. I lost my wallet and I found it. I FOUND IT. I had a feeling I would – I didn’t lose hope. But the fact that I found it, it was surreal. We took the train back to Nervi, where we had the ice cream, went back and thanked the man gazillion times and bought more amazing gelato. He was explaining to me how he was going to take it to the police station if I hadn’t called in the morning and gave us a whole 50 cent discount on our purchase. I was still in awe that I had found my wallet and my passport – and the knot I had in my stomach for the last 18 hours or so was gone. I still had no money because I cancelled my cards but I have my passport and faith in humanity back. I still hate myself for being so clumsy but like I said, the universe was teaching me a lesson.

– Don’t assume you have your things with you, check constantly
– Be aware of everything
– Keep calm and work things through
– Check, check and triple check everything
– Don’t carry around valuables you don’t need to be carrying around
– Your back up card needs to stay home